The significance of Hinduism 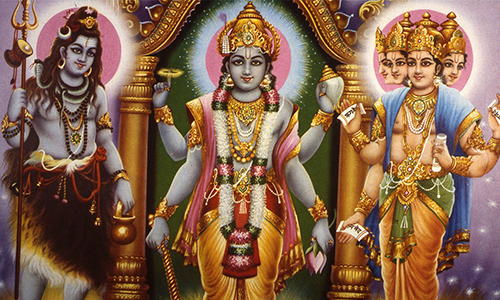 Mahasambhuti Chakradhar: (After being silent for some time) - Yes they are. But it is not good. (After a pause) - They will learn the hard way. They will understand the value of Hinduism after undergoing unfavourable experiences for a very long time. (Pauses again....starts to speak but checks himself)

Devotee: Will they be born into other religions?

Mahasambhuti simply looks at him for some time but does not say anything.

Every religion is an attempt to delve deep into the chaos and attempt to retrieve the meaning of life. The journey from birth to death is called life. But what does this journey deliver when there is death to take everything away at the end? Why does a person have to undertake this journey at all? Is it in his control or is he destined to enter into the world and experience its fleeting pleasure and pain?

Religion springs from the cry that emerges from the soul. It seeks to establish order amidst chaos. It provides a template to follow, deliver knowledge and meaning, provide a goal, and put an end to misery and pain by delivering the absolute truth.

Life is not permanent. Everything that is seen, felt, perceived through the senses is temporary. And yet there seems to be an yearning for permanence. Not just permanence but permanent bliss. Where does this desire spring from? Is there such a thing called permanent bliss? Where is it located?

What stands between fleeting experience and permanent bliss is a doubting mind. Religion has to patiently answer all questions, deliver the truth, and lead the seeker to the state he or she desires.

Religion also has to deliver an enabling environment for people to find and practice the truth. It has to feed and maintain the frame, provide livelihoods, protect against atrocities, and shape a society that functions at its best without dissolving into chaos. It is like a mother that looks after her children.

But it has also to deal with cycles of ups and downs and preserve itself despite adversities. It knows that such upheavals are painful and depends upon selfless adepts to take things forward when darkness descends.

Religion has a life of its own, a current that takes the entire creation forward. Everyone finds something in it and knows where to fit in. It helps both individual and society to absorb the shocks of events and proceed without losing hope and getting bogged down by painful experiences.

Thus religion has a lot to do. It has to feed all. It has also to deal with the doubting Thomas's and with the dissatisfied mind that seeks individual pleasure at the cost of disrupting society. It has to assuage the feelings when to establish itself, it has to go against the structure of societies that are a threat to the goal that is sought.

Religion needs to be all encompassing. It needs to balance individual freedom with societal obligations and keep the flame burning. It cannot be lopsided. It has to go with the flow without disrupting the functions of an established society.

Hinduism deals with all of this. It has established natural laws, evolves with the passage of time, changes with changing norms, and does not ignore any sect within its fold. It has the capacity to absorb practices from other sects because it understands the concepts behind the fleeting world.

It tries its best to avoid conflicts, limiting them to intellectual debates, and arguments, but as the Ramayana and Mahabharata reveal, it can take up weapons and fight.

Religion is not to be discarded. It is to be understood and employed. It is the thread that binds. It involves sacrifice. It requires wisdom and intellect. It performs through those who practice it despite adversities. It can chastise those that don't. It abhors those who pretend to practice. It is an enemy of those who deceive for personal gain.

It is a labyrinth that needs to be negotiated with all the resources that can be mastered.

At the present time it is a warrior that is poised to strike preparing a war that will test all. It seeks warriors that can perform. Behind the facade of helplessness is a force that is in command. It is not for nothing that the wise fear what is coming. When the reigns of the world are taken over by the supreme intelligence that rules, the justice delivered may seem cruel and insensitive. But the sculptor knows what he is doing.