The new religion is coming. Destruction too. 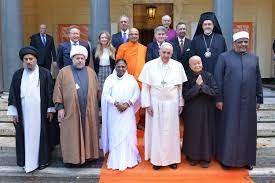 Indians have always been constructive. They took pride in contributing to society. Then a destructive mode was inculcated. It was taught that everything must be broken and brought down. A huge inflow of funds ensured that it became the livelihood of many.

Political parties thrived on such funds, its members only needed to follow without questioning. Coordinated thinking was discouraged. Group thinking was discouraged. Divisions were encouraged. This has resulted in a stage where each one is an enemy of the other. Every act is an opportunity to put out of context and deride the other. This has become a fad and peer pressure ensures people continue to pursue this line.

There is just one thing that people were not allowed to question.

- What is the goal of this destruction? After everything is broken down what will replace it?

Not only that. In the craze for breaking down there is also no vision or preparation for creating a new society.

But those who subtly encouraged this process and stayed behind the curtains never forgot the goal. That goal is to destroy nature and humanity to create an artificial world run by artificial intelligence.

These people are extremely religious. They are committed to their practices which they have ensured now engulfs the world; debauchery and deprivation at its worst that defies all natural laws.

People have been unknowingly following and practicing that religion. Currently the new religion is being given final shape. In 2023 it will be launched with "consensus".

The Prime Minister of India has now declared while opening the huge Amma Hospital, The Amrita Hospital at Faridabad "The vaccination program has progressed well thanks to cooperation of spiritual leaders. Health and spirituality are now linked in India."

"Stating that health and spirituality are closely linked in India, Prime Minister Narendra Modi on Wednesday said the country did not face vaccine hesitancy of the kind seen in many other countries due to the impact of spiritual leaders."

Do you understand the implications of this statement? The injection to modify human beings have been accepted by the new coterie of spiritual leaders. Do you realize now? Our humane base has been eroded and there is a new group of leaders practicing a new kind of spirituality.

That brand of spirituality will become mandatory once it is launched. There will no longer be any atheists or seculars. All will fall at the feet of the new religion because adherence to it will ensure their pay checks.

Only 25% of the present population will survive. Only 10% will be able bodied. The sieve will ensure only those suitable survive; those who are close to Mother Earth and can survive its fury.

The current intelligentsia will all perish. There will be no one who can carry the present madness to the next world.