Relation between religion and spirituality 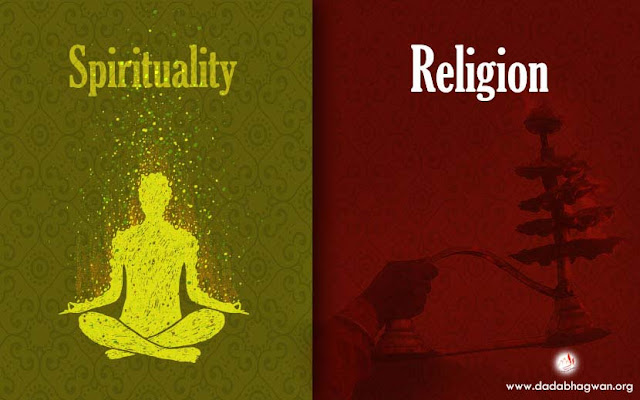 Many are of the opinion that religion is to be abhorred and spirituality or Adhatmya alone is to be embraced. However this is not right.

Religion is a set of rules, spirituality is a conscious effort to achieve the goal of life. So while one is about molding life unconsciously, the other is being conscious about it. One fulfills the other.

You can practice spirituality or consciously move towards the goal only when your karma is conducive and has put you into that position. Religion is about directing you so you do not fall into the pit of the world. Both are rescuing you.

India is a land where religion had touched everyone and people followed religious precepts as a habit. This amazed the invaders starting from Alexander to the  Britishers. They could not understand a race that did not lie, did not steal, refrained from committing heinous acts, and had no fear of death. They were surprised because no one was teaching the people. There was no high priest who was preaching from the pulpit.

In India there is no one formal religion. There are hundreds of sects and no one sect imposes itself on others. These sects vary in practice but have the same goal of self realization. One is free to join any sect depending on ones taste, preference, and ability.

India never had acrimony towards any other religion. Rather the religious practices of foreigners evoked interest and people studied them out of the desire to know and embraced what was suitable. Therefore portions of Islamic and Christian  practices were adopted.

India also had atheists as a sect and they were well tolerated. They too had a philosophy of their own called Charbak philosophy.

India believes in a personal God and also is accustomed to the impersonal. Both flow effortlessly. You don't have to believe in any God to practice Patanjali's Yoga or Shankara's Vedanta. They are methods of inquiry that can be practiced by anyone. The Upanishads are Godless.

Those who seek God or self realization  inevitably turn to India. They visit the country or read its scriptures and voluminous literature. And again there are now many who reside in India and either remain oblivious to or ignore its heritage. No one is supposed to trouble them either.

However Hindus are tolerant to a level beyond which intolerance comes to the fore. This is applicable to sects as well as religions in its fold. The tussle between Saivites and Vaishnavites, the Bhakti and Gyana cults, clashes with Buddhists are examples of this. The Hindus believe in God, Karma, afterlife, rebirth, and realization. This is the core of Hinduism.

Many Hindus resent the term Hindu to describe their religion. This term was used to identify people beyond the banks of the River Sindhu and does not signify any religion. The real term to define religion in India is Sanatan Dharma.

Sanatan means ever existing - without beginning and end. Dharma is duty. It is all about following the inherent flow of the universe as revealed by the creator or the dreamer of the dream called the world. This Dharma has a power of its own and can decimate what is not according to it. This is what leads to fall of civillizations that drastically veer from the path.

The Buddhists have practices they undergo to reincarnate in the Indian region. To be born in any other region is considered problematic. Practicing Hindus cannot even dream of taking birth in any other place.