Moksha - The path of liberation 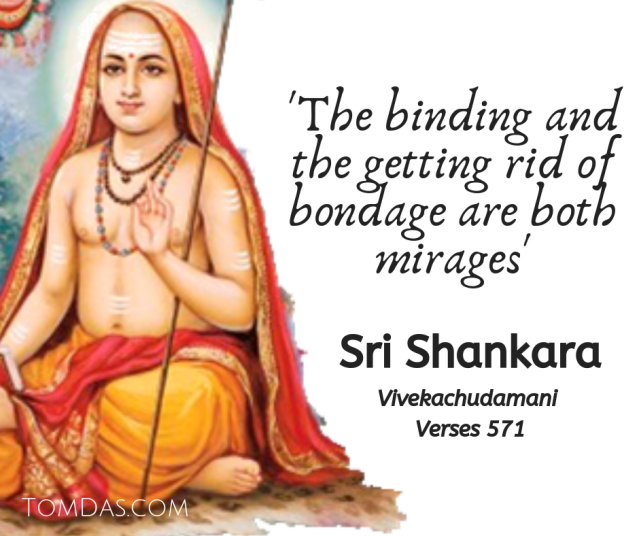 Sri Ramakrishna had said, "It is difficult to say that the world is an illusion while you suffer from a toothache." But I am attempting this write up while suffering the same! Pain is a part of my life. I have got used to it.

It is really very difficult to comprehend that the meticulously planned manifestation within which we live does not really exist. But our sages, thinkers, and scientists have that opinion. The world is made up of nothing.

How do we know that?

- Everything in this world is impermanent. Here one moment gone the next

- Thus our mind and thoughts have a very important role to play. No mind, no thoughts, no world

So what is this world?

- It is the seeming emergence from nothingness

- All of these forces are themselves illusory

So where does it emerge from? It emerges from permanence. There is a permanent base. Our Sages call it Brahman or existence consciousness bliss. Sat-Chid-Ananda.

Let us compare it to the birth of a person. Once this existence enters a womb it starts experiencing the world though in a state of limbo. After nine months it emerges from the womb. When the mother draws it to her breast its life of duality starts and it starts drinking the milk. Then it gets a name and its individuality strengthens. It becomes a distinct entity. In this state of duality it recognizes three states; jiva, jagat, and ishwara. The individual, the world, and the creator. Once again none of these really exist.

Now the individual is in a great dilemma as it is trapped in a body experiencing the world. It acquires education, takes up a livelihood, earns money, purchases property, gets married, begets children, feels it is responsible for the family, it has to earn more money, purchase more property, has to suffer and be overwhelmed when he suffers disease, loses money property and family members. He fears death that will take away everything from him. His cup of woe is complete.

He came out of nothing, is nothing and yet his suffering knows no bounds! He suffers because of an illusory force called the ego which forces him into being a separate entity in a land of duality. He is in an illusion, is an illusion. He dreams his existence, joy and suffering. But his nature is existence consciousness bliss. What a quandary!

A monkey has spotted a jar full of candies. He manages to open the lid and delighted he thrusts his hand through the narrow opening and grabs hold of a fistful. Now he has a problem. His fist cannot exit through the narrow entrance. He is trapped. He dances around trying to extricate his fist but to no avail. His greed got him into this situation and his greed prevents the end of suffering. He has only to let go of the candies. But that task is difficult and does not even cross his mind.

Similarly we are so enamoured by this world, our individuality, and what we feel we own that we cannot even think of letting go. Our suffering has become our best ally, guide and seeming saviour.

How do we escape?

What can be done to seek our way out?

These are the first steps. We should stop to think and ponder about the impermanent nature of the ego and the world. Our thought process leads to wisdom. Then we develop dispassion towards the objects and the world.

The job is half done. What next?

- You convince yourself that the world rests in Brahman

- You convince yourself that you too are Brahman

This is a long and arduous path that has to be travelled. Here you are out of logic and reasoning. You develop faith in the words of Sages.

The mind must then turn inward.

- In meditation you try to touch your core being

- In meditation you lose all concepts

- In meditation the power of illusory forces on you slowly diminishes

- In meditation you begin to feel the tug of something indescribable

You also continue to cogitate to reinforce the truth that neither you nor the world exists. This is awakened meditation. You are awake and aware of your core being all the time. The ever permanent indestructible core. The core attaining which all fear, anxieties and suffering end for ever. There is a bliss that is indescribable. Nobody has been able to describe it.

Next comes the power of grace. You do your bit and wait for the force to pull you in.

All this requires sacrifice. You need to sacrifice yourself. Atma bali. Exceedingly tough and impossible for the one who feels that the world is everything and the body and property are all that one has.

The world and Brahman cannot coexist. You need to totally give up one to get the other. This is called renunciation. But this does not mean external renunciation. You can renounce the world and hide in a cave. But the world will continue in full force within you.

Renunciation is internal. You do everything but know that you are not anything. That is the real renunciation. You work even more as a power then acts using you as the tool.

You become like a maid in a rich man's house. You are accepted as a member but in your heart you know that you have to return to your own family.

You need to loosen the grip of the fascinating world and turn towards the unknown.