How will the next yuga be? 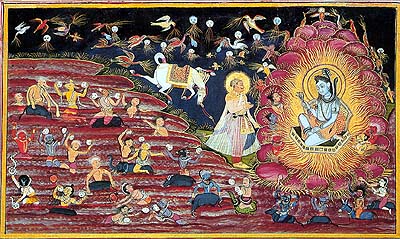 (Image from the internet)

There are many ideas about the type of society that will evolve out of the present turbulence.

Anandamurty the great revolutionary had warned that the world will slip into an ice age. It will be difficult for human beings to survive. According to him teleporting the survivors to another planet to escape the ice age was the only option.

Many feel that the destruction will not be huge and that there would be a continuation and therefore it will not be difficult for the new society to emerge from the ruins of the old.

There are those who say picking up the reigns after the great destruction will not be easy and it would take decades before society can be organized.

Astrologers pointed out in 2019 that with the five planet congregation in December 2019 a 45 year troublesome period starts. That would end in 2064. According to Achyutananda Malika the next king of Odisha will be Anantakeshari who will rule from 2065.

In the Achyutananda Malika is mentioned that the Jagannath Ratha Yatra will be conducted without devotees. The Kali Yuga would last 9 years, 9 months, and 9 days after that pushing people into many difficulties during that period. This happened in 2020 and therefore the end time is 2029-30. Gradually in the gruelling process the people will realize their follies and try to revive the spiritual culture of India. The next civilization would witness highly repentant people who would be guided by lofty realized souls who would take birth.

MahaSambhuti Chakradhar did not want a long period of disturbance. He was hopeful the destruction would be over in a short period and the rebuilding of society will be swift aided by an advanced civilization that would offer new technologies and the money from Temples and hidden underground treasures would be utilized for construction. He had communicated that great souls would be born on earth around 2035 and a huge flow of knowledge and practices would engulf the world.

Sri Aurobindo had predicted the descent of the Supramind. The conflicts of Kali would in fact aid and facilitate that descent. Behind the conflicts and troubles he saw the ascent of human aspiration that would invite the Supramind to the earth. He foresaw a new type of ethereal life with people having vijnanamaya bodies instead of physical ones.

Almost every religion foresees a golden era that will last for a 1000 years.

What will be that golden era? How will that society be?

First let us look at the people who would survive. I always had the premonition that it would be the people who know how to live amidst nature that would survive. My view was strengthened when I found MahaSambhuti Chakradhar born into a tribal family with a huge fan following among the tribal.

I was fortunate to listen to his interaction with the community and how he entreated them to revive their art, dance forms, and culture. He talked about their deities as well. He knew they had good knowledge of agriculture. He also knew the tribal were spiritually inclined.

He had also told us that all warriors would die in the coming battle. I guess the fighting attitude will go with them. None of the present intelligentsia will probably survive as they do not possess survival skills. All cities and urban centers will be razed.

Only simple folk who have mostly stayed away from this civilization will witness the next. Their humility, nature worshipping attitudes, ability to do hard work and adapt to circumstances will see them through. Simplicity and spirituality will be the gold in the golden age.

Blessed are the poor and simple at heart for they will inherit the earth.

There will be equality, Chakradhar had assured to his close devotees who were fed up of class and caste struggles. He had also predicted that people would pursue Brahmavidya - the art of connecting to the omnipresent Consciousness. They would be guided by helpful souls. Brahma would be the Guru and there would be teachers pointing to the path.

But it will not be a primitive society. As indicated very advanced energy based technology will be available. The next age will be more advanced technologically than the present.

At that time I was puzzled by the reference to the term advanced civilization. Chakradhar had never revealed from where they would arrive. But today I am convinced that this civilization is from our own earth; the inner earth.

We know that the residents of the inner earth, who occupied the poles when temperatures were high in those regions, are our well wishers. Today they live deep in the earth driven there by the cooling of the poles. They had communicated via Admiral Byrd that the earth is heading towards destruction due to lopsided development and that destruction is very near.

Will the inner earth civilization intervene in the third world war? Very likely. Chakradhar had said a nuclear war would be prevented as it would push the world beyond revival. This advanced civilization would not like that. We know from UFO sightings near nuclear stations that unknown beings are keeping watch on nuclear advancements. Can they thwart the nuclear war? Hope they do.

Thus there are many views about the future. If I am forced to take up a body again I would prefer to be among simple folk and in natural surroundings. I have always felt myself a misfit in the urban milieu. I have always dreamt of a village life with greenery all around. The village I was born in, hemmed on two sides by rivers, remains my heaven.

All complexities arise when we become materialistic and crave more than what nature can provide. Problems begin when we concentrate on ourselves forgetting our connections and duties towards others.

Having to carry a body is the worst thing that can befall anyone. The body is the source of our suffering and can be the medium for descent into hell. The Mother of Pondicherry envisaged a society of angelic beings. That would be ideal for those who do not wish to have a body and work selflessly for others.

There is in fact such a world or rather worlds where very advanced beings exist. Our earth is bang in the middle of lower demonic worlds and upper heavenly ones. It is a path one must cross. Chakradhar talked of spirit beings who relentlessly work in the many dimensions. They are the Gods we worship.

We all get what we strive for. Therefore the right yearning is necessary. Our fate lies in what we think and do. We are not what we assume ourselves to be. The visible world is a cruel illusion.

As Sri Ramana Maharshi said, "The invisible Self is the only reality. The visible world does not exist."

Our bodies, desires, aspirations, anxieties, fears, are ephemeral. They will go. With wrong notions we continue from one dream to another; one illusion to the next.

Let us desire nothing and aspire for the nothingness that alone exists. Even the witness stage has to be surpassed to experience the Turiya or the "beyond everything" stage.

The yearning for realizing that stage comes after great suffering. The turmoil ahead will open up huge potential for breaking established notions that hold us back. May God give us the strength to overcome and learn from the debacle.