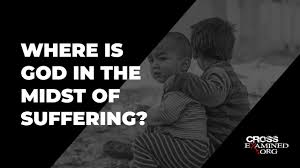 Why should there be suffering if there is a God?

First let us look at the concept called God. Quantum physics has proven that everything is energy. Hindus believe that the energy is Satchidananda (existence knowledge bliss) and is all intelligent. There is also a state that is beyond the energy. That state is emptiness. In it is contained all as seed. It is also impartial and a witness to everything. It is our natural state and we are that.

Ayurveda says everything sprang from an energy base. From energy came space, air, fire, water, and earth. Everything in this world is contained of these five elements. To be healthy and happy one must be mindful of the balance of these elements and follow the natural laws. It also states that one can invoke the underlying energy base to cure incurable illnesses.

Hindus try to invoke that energy through prayers, mantra, and tantra. The more energetic the body and the world, the more the natural laws are followed, the more the quantum of health and wellbeing that follows. If these practices and knowledge is disregarded, then everything degenerates and chaos follows.

There is another angle to this. According to Hindus the world is Vishnu's dream. Quantum physics reveals the world is a dream construct. Therefore Hindus also believe in strict mental discipline because actions are first reflected in the mind. Mental hygiene and mental character leads to a sane world. Is it difficult to believe that disturbed minds lead to a disturbed world?

This does not mean Hindus do not progress. Hinduism is not static but dynamic and has the ability to adapt to changes. However the core knowledge and realization reflected in Vedanta and so beautifully summarized in the Bhagavad Gita remains the same and society progressed mindful of the core teachings.

So why does suffering exist despite the presence of a God?

It is said that the core scriptures (as enumerated in the Vedas and Vedantic scriptures - the prasthanatraya) have directly emerged from God. Therefore the energy provides the knowledge. The energy is also behind the world that runs according to that knowledge. Endowed with a thinking mind, man created in the image of that energy needs to understand and feel the spiritual basis of the world and act in the best interest of the collective.

This happens in every Satya Yuga. The cycle progresses to other Yugas Dwapar and Treta where individualism and materialism progressively raise their heads and suffering places its foot on the world. In Kali Yuga when everything is disregarded and base passions rule, the connection with the spirit just hangs by the thread and suffering engulfs the world. Then the world is reset and after an intensely destructive phase Satya Yuga returns again.

God remains the impartial witness. But it is not the rogue made out to be. For God or the primal energy is the base on which the world image is reflected. God lives in this world like salt lives in the ocean water. The suffering that the world undergoes is borne by God alone.

The satanic forces have turned the world on its head. The toxic culture and extreme toxins that make up the modern civilization has poisoned the body and mind. In such a state what is good and ennobling is rejected and what is crude and destructive is adopted.

So how does good reestablish itself? Mahasambhuti Chakradhar had answered this question. "This world is negative. Negativity is at its peak. Therefore the change will come through extreme negativity. While the world crumbles weighed down by negativity, the positive nature of the world will emerge from the ruins. Do not blame me for the peak of negativity. That is how I will work this time. Do not make the mistake of criticizing me. I know what to do."

So there you have it. Suffering is inevitable when the wrong path is taken.

What is our role?

Mahasambhuti had said, "There was the Mahabharata that engulfed a significant portion of the world. But this time we will have Mahaviswa - the war will spread to every nook and corner and touch everyone. As the war arrives at your doorstep you will be forced to take sides. Choose carefully and wisely as your action will shape your future. If you choose the positive, despite difficulties, you will achieve a higher state. That positive forces will win is guaranteed and ordained therefore fight for the better world. When needed be ready to give up your life. The Mahabharat witnessed one Arjuna. This time the youth who prefer positivity will become the million Arjunas that are needed."

"People are turning away from God, is that not a concern?"

However these are rare in the Kali Yuga where the body and mind are weak and run after sensual pleasures and actions are directed at attaining material benefits alone. The lower chakras being active the higher ones are neglected. Moreover with increasing material benefits people do not feel the need for God. Worldly education brings arrogance and God seems redundant. It is not surprising for people to become agnostics or atheists at such times. As a result morality disappears and society gets disrupted.

Increased materialism does not result in internal peace and the stress that results leads to illnesses. The spirit is the basis for the health of both individuals and society. Spiritual laws are the fabric that holds civilizations together and fosters the growth of humanity.

The struggle that we see in he world is the process of the progress of matter to super-consciousness. From tamas (indolence and inaction) we move to rajas (motivated action) and to sattva (unmotivated pure action) and then transcend that stage too as we reach the state that is abangmanasagocharam (beyond the senses and the mind) which is our goal. If the majority forget their purpose in this world this process gets disturbed and instead of amrita (nectar) we are left holding the platter of visha (poison) which leads to prolonged and needless suffering. So yes, that is a concern.