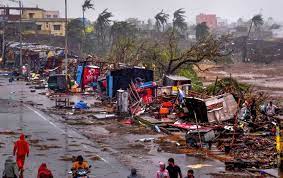 (Image taken from the Web)

The climate has changed. Changes in weather pattern that persist for a duration of 10 years or more is termed climate change. India has been witnessing changing weather patterns for over a decade.

Climate change impacts are pronounced in the coastal districts of Odisha. Rising temperatures, erratic rainfall, increase in frequency of cyclones, and an advancing sea are attributed to be the impacts of climate change.

The cause of climate change is attributed to anthropogenic or human activities. It is said that burning of fossil fuels and industrial emissions have led to increase in greenhouse gases; particularly carbon dioxide. Methane, a greenhouse gas is emitted by livestock.

These gasses form a layer in the atmosphere and reflect back the sun's heat bouncing off the earth's atmosphere to create what is termed global warming. The solution being proposed is completely eliminating carbon dioxide from the atmosphere by 2030.

By doing so it is claimed we can continue our activities on earth and yet become free of climate change impacts.

The issue of climate change has become controversial as critics point out;

- Historically the world has moved between warm and cold stages. Warm stages have been followed by periods of very low temperature called mini ice ages. Then again temperatures have risen to ensure normal life for the warm blooded

- Carbon dioxide is a natural component of the planet. It is essential for vegetation which consumes it to produce oxygen. For the benefits of Carbon Dioxide please go through this article; http://www.thegwpf.org/content/uploads/2015/10/benefits1.pdf

- Nature has its own corrective mechanism. There will be no runaway impacts unchecked by nature

- The climate will continue to change regardless of human activities

We must be wary of the no longer hidden agenda.