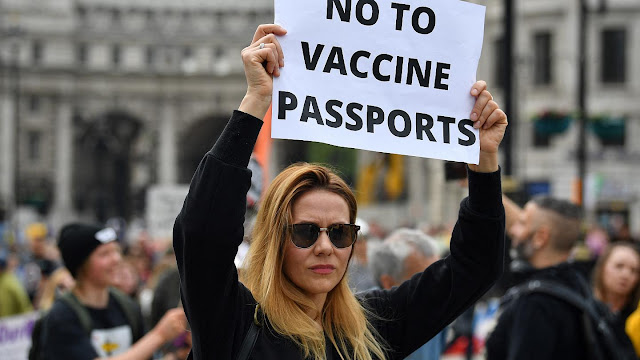 And the liberals are being blamed.

But the reason behind the rebellion is not liberalism at all.

It is knowledge, fear and anger.

For people who have been looking at the pharmaceutical sector critically for a number of years it is very evident it does not operate singly but in unison with the whole system. And that system is oppressive.

- The banking and financial sector

She points out how these entities work in tandem to achieve a common goal. She talks about being privy to internal arrangements. The goal is direct rule by the extremely rich and powerful who have so far controlled the world from the shadows.

The synergy is possible because the majority shares in these entities is owned by a few. This becomes possible through investments of asset management companies ( mutual funds) always flush with funds whose shares again are owned by that few.

If you disbelieve this angle then kindly study the Covid Action Platform (it contains the wheel that provides the total picture. You need to locate that wheel) as delineated by the World Economic Forum. This all pervasive futuristic plan was declared on 11th March 2020 (!!) in consultation with corporate leaders. It is like a lot of people could correctly predict what is currently unfolding. While the plan is technological, other wheels in motion additionally ensure control over natural resources and their management.

The WEF has no authority or plebiscite to do what it is currently engaging in.

We are headed towards a world owned by a few. The word 'world' here includes all life forms in case you think otherwise.

On top of this we have pharma shenanigans;

- Shying away from health and cures

- Disregard for those adversely affected

- Literally owning the WHO

Thus public have reasons to rebel. The rebels know fully well what they are up against.

The disease response measures too are not without reproach. If we consider the fact that the spread is aerosol based, they do not work. They are a disaster when looked at from the point of health and immunity. On top of that they are crumbling livelihoods and disrupting society in a very large scale.

We are now being told about a deadly third wave. We should ask the following questions;

- Can the second wave be more vicious than the first?

- In the event of 70to 97% of the population gaining protective antibodies can there be a third wave?

- Can any virus mutate to be more dangerous than the original?

Medical and health wisdom would not agree.

Such a situation can arise only if;

- There is some other provocation

We should be wary. The truth is being suppressed.

How do we then control the disease?

Let us analyze the vulnerability aspect.

- Those with Vitamin D deficiency

- Those with Vit A, C, and Zinc deficiency

- Those with immune system dysregulation

Thus we realize that the unhealthy and sick are driving this epidemic; people who lack the vital minerals and vitamins because they are not getting it from food. We have to respond with health and not with measures that are detrimental to health.

What should be done?

- Ensure uptake of fermented foods to correct the microbiome

- Provide nutritious food to those who cannot afford

- Stop all interventions that adversely affect the immune system

- Isolate and treat only the visibly sick

The food availability and supply can be ensured by;

- Addressing the woes of farmers

- Including fruits, vegetables, tubers and mushrooms in the public distribution system

There is also the need to revised our stance on acute diseases. As famously said by Dr Antoine Beuchamp, MD, we do not catch disease, we nurture disease within us by resorting to faulty food and habits. To that we can add the up to 1,210,000 toxic chemicals we can encounter everyday in the modern world.

Dr Beuchamp also said, the flies do not create the waste heap, the waste heap attracts the flies. Pathogens do not cause disease but the internal state of the body invites them to cleanse the waste and toxins within through a process of fever and elimination. The body produces the required pathogens according to the nature of the ailment within.

Suppressing the acute expression of disease is why chronic diseases have become the plagues inflicting populations. 96% of the people are sick, 54% of children suffer chronic diseases. The system that claims to be the only scientific approach should be ashamed of this outcome.

Dr Beauchamp's theory is today fully supported by the research into the fields of the microbiome and mycobiome. The findings of the human genome project, the study of epigenetics, the inquiries into the circadian rhythm, research on mind body relationships, into the role of mitochondria in health, the role of gut and vagus nervous system, and the application of the chaos theory to health have decimated the false theories that still occupy centre stage in the field of health.

The solution lies in internal cleansing, and the restoration of strength and vitality, not in killing the pathogens. The emerging knowledge about the destructive nature of antibiotics and antiviral drugs should awaken the profession from its slumber.

What should be the role of a health system? The Rig Veda defines it as;

- Keeping the healthy at the peak of health

- Leading the unhealthy towards health

Our modern medical paradigm has turned health wisdom on its head. The sale of medications and devices has become the sole pursuit instead of ensuring the health of populations. The industry fears health as it would decimate business. It desires and actively creates disease to survive. Curative systems are dubbed as quackery and shunned.

The current disease as we know now, is not an influenza like illness. It is a vascular disease provoked by the spike protein. Hence our testing and treatment approach ought to change.

The disease has exposed the whole system. Now it is reform, perform, or perish. Not easy as the pharmaceutical sector does not favour change. It seeks to aggravate the situation to pursue its own agenda.

In this backdrop rebellion is a necessity.

The medical profession has been goaded towards ignoring the full picture. Those pointing it out are projected as lunatics.

This stance bears well for the industry but it destroys the image and credibility of the practitioners and sickens and kills the patients.

There are two things vaccinations ought to do;

There are three types of vaccines available now.

So they all deal with the spike protein.

If the vaccines do not offer protection and cannot check transmission the argument that they will prevent children from being carriers and stop them from transmitting falls flat.

Any sane person should question why these injections are being given.

The argument that they prevent hospitalization and death has to be compared vs natural infection. The natural infection is not hospitalizing and killing all. The statistics of 85% being asymptomatic, more than 10% of cases being mild and moderate, and some among those hospitalized succumbing (to the disease, comorbidities, protocol?) stands good here too.

As per data emanating from Israel a vaccinated person is 6.72 times more likely to be infected. The risks of natural immunity failing ranges from 0.01% to 1%. So what is the vaccination doing in addition? According to Dr Amitabh Nandy he is convinced it does not offer any additional benefit. He is a microbiologist and virologist.

What are the consequences of injecting populations who have developed antibodies? The 68%? How do injections interfere with innate immunity? We know the answer. That leads to a thoroughly confused immune system rendering the person susceptible again. Once again, why are we injecting all and sundry?

What about recording AEFI and breakthrough cases? Neither doctors nor the injected have any idea about what to expect. The injected do not know they need to report. We all know what is happening. Let us study the Europe, USA, and UK databases to know what is being reported.

What about studying the adverse effects and listening to those who are pointing out the possible long term effects because they have taken the trouble of investigating what is happening and why?

There are so many issues to stand up and protest.

Injecting children is a priority simply because the injections need to be included into the childhood schedule. This is the only benefit.

We also know how much the manufacturers are earning.