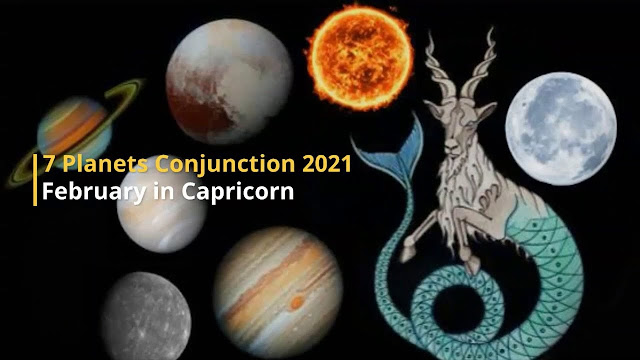 There will be a combination of 7 planets in Capricorn starting 9th February 2021. Many say it is a 6 planet combination but it is more than that. Pluto needs to be included which adds to the mystery as Pluto represents hidden forces at play. Secret cabal! Moreover Mars and the Rahu are also looking at Capricorn and that makes it an explosive mix.

As all planets are in between Rahu and Ketu the chart becomes one of the much feared Kalasarpa Dosha. There is more. There is the Guru Chandal Dosha which will cause the wisdom and intellect to fail. Though Mars is out of the combination the combination happens on Tuesday and the date is 9, both indicate the influence of Mars. This is extraordinary.

The importance of this combination can be gauged from the fact that some serious astrologers are preferring to stay silent and not comment. There are also those who are asking people not to listen to predictions of doom and destruction of the earth. Instead they speak of a broader change that will end the destructive path followed so far. The senior astrologer I follow is silent on the issue. But in a discussion a few months ago he had said the sky is giving a message and big changes are underway. He had hinted the next 45 year period will bring hardships.

Why do planets converge? It is said that they get together to decide about changes that get reflected in future events. Thus a great change is foreseen. The effect of the last 6 planet combination in December 2019 is still at work. How long will the effects of this combination last? It will last till April 2022 and end when Saturn moves out of Capricorn. Will that end result in any improvement or will there be another phase? Only time will tell.

What do astrologers say about the changes that are coming? Expectedly it almost completely matches the Great Reset! Yes, believe it or not, all the elements of the Great Reset are reflected.

- Drastic changes in rules, regulations and laws will shock people

- Artificial intelligence will rule. Everything will be digitalized

- Robots will become visible everywhere. Industries will be ruled by AI and robots

- The above will lead to alarming levels of unemployment and discontent

What about conflicts and natural disasters?

- A highly inflammatory war like situation will be observed. The good thing is Mars is out of the combination. Hopefully a big war may not happen

- There may be a conflict in the sea. A ship may spill its contents. An airplane may crash into the sea. A tsunami may happen. The water element will be destructive

- Forests and wild animals will be affected

- Huge swathes of the public will go into mourning indicating big natural disasters. An inordinately large number of people will die from various causes

- Fear will rule. People will be scared and deeply disturbed by happenings around them

- Protests will become the norm. Globally people will be out on the streets

- Incidence of fires will rise

- Inflation will rule and people will be burdened with taxes. The prices of minerals and metals will rise and be beyond the reach of people. - Famines will be seen and people will find it difficult to feed themselves

- A celebrity will suddenly and unexpectedly die

- National flags of countries will fly at half mast

- The North, North East and North West will spell trouble as well as the East

- Problems will be observed in Bangladesh as well

- Coastal regions have to be alert

- A spiritual personality may surface to lead the people

What is the surprise element?

- Arrival of aliens! Yes this is predicted! They are supposed to arrive physically or send messages from various destinations! A psy op? Very likely.

What do we do?

- Keep calm and become a good samaritan. Helping as many people as you can will reduce the impact on you

We are entering into a world that most of us will not like to be a part of. But we have to go through it. It will ultimately bring the best out of us as we realize the folly of this false civilization.