Vaccines cannot prevent disease? What about small pox and polio? 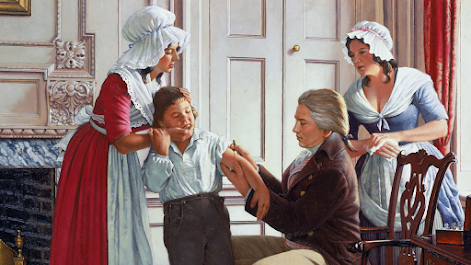 When I say there is no evidence vaccines have eradicated or eliminated any disease, the question immediately pops up; what about small pox and polio? So I need to repeat the facts again and again.

- What people are unaware is that Jenner's idea that cow pox would eradicate small pox was opposed because such an idea was already suggested by a farmer prior to him and people rejected the idea because they had noticed milkmaids infected with cow pox came down with small pox. It offered no protection

- Jenners concoction was horrific. The puss of small pox pustules was collected from dead bodies of victims. This was passed through cows, then through horses, then again through calves, and sometimes again through men. This became the vaccine material. There was no attempt to see what was in it and the concoction was used till the last drop regardless of decomposition

- In countries like India and Africa dogs, goats, rabbits, hens, and even monkeys were used to produce the vaccine material that was called "pure vaccine lymph"

- This pure vaccine caused the most dreadful diseases to spread among populations. It spread bovine syphillis and the dreaded syphilitic pox, the destructive form, replaced the earlier aggravated chicken pox type disease that left no marks. The epidemics increased and so did the number of fatalities

- Where people protested and refused to take the vaccine both incidence of pox and deaths therefrom reduced drastically. The official statistics are available to prove this

- The vaccine spread syphilis, tuberculosis, leprosy and other serious skin disorders, cancers, serious neurological problems, serious mental disorders, all kinds of digestive disorders, plague, and incidence of diptheria, whooping cough, and tetanus skyrocketed in children and the opportunity was used to push in the DPT shot

- At a point of time it became abundantly clear the vaccine was a disaster. It should have been stopped. But the WHO stepped in and decided to organize a small pox eradication campaign using the same vaccine. Probably it was realized that vaccines cause serious diseases and those diseases would brighten the prospects of the infant pharmaceutical industry trying to find its legs

- The WHO devised a strategy. 1,30,000 cases of small pox worldwide were inflated to 15 million to justify the drive. Then the cases of small pox were bifurcated into chicken pox, measles, eczema, and rash. As the disease was spreading abnormally among those vaccinated, doctors were told those cases could not be small pox because they were vaccinated. Therefore doctors started recording them in other names

- But even these methods did not help. The vaccine continued to create havoc. The WHO then observed that the countries that refused the vaccine were adopting methods like sanitation, hygiene and nutrition. It too advocated these measures

- Much later the vaccine was examined to know what was contained in it. To everyone's utter surprise the vaccine contained neither the small pox virus, nor the cow pox virus, or the horse pox virus! A fictitious virus name was invented, the vaccinia virus, and declared to be present in the vaccine. The origin of the virus and how it "eradicated" small pox remains a mystery

One of the greatest lies of the medical empire was perpetrated on the people.

- Polio can be caused by neurotoxins like DDT and arsenic, heavy metals, other neurotoxins, tonsil operations, and any kind of injection

- In India there were 12,000 cases concentrated in UP and Bihar. Indian doctors recommended improvement in hygiene, sanitation and nutrition instead of a vaccine renowned for causing paralysis and cancers

- Polio viruses are usually harmless. They do not cause any symptoms in majority. In rest they can cause symptoms of common cold. In a very minuscule portion they can cause lameness. Of those affected by lameness the majority recover. It is known that certain children are susceptible to polio but the mechanism of how an intestinal virus causes polio is not yet known

- The kind of visible polio we witnessed earlier was due to the use of high quantities of DDT in agriculture and malaria eradication programmes. When DDT was phased out these cases disappeared. It was known as anterior horn paralysis

- After the programme was launched the cases of viral polio were segregated. So in one stroke 400,000 cases came down to 6200

- The diagnostic criteria was changed. While earlier lameness for 20 days was recorded as polio, the period was extended to 60 days thus again drastically reducing the figures

- While earlier visible observation was enough to record polio, it was made mandatory to check for virus in stools. This further reduced the recorded cases

- The vaccine started causing paralysis as the vaccine strain virus were shed in saliva and stools, became extremely virulent as they collected in drains and caused waves of paralysis. In fact all cases of polio recorded currently all over the world are due to the vaccine

- The WHO refuses to release the number of children paralysed due to the vaccine. A study in India calculated the AFP increase after vaccine rounds intensified came to the conclusion that 491,704 children were likely paralysed by the vaccine in between 2000 to 2017

- The cases paralysed by the vaccine also have very high fatality rates. As Dr Jacob Puliyel remarked, "Cases of polio and NPAFP are clinically indistinguishable but NPAFP cases have double the fatality rate than polio."

- The Govt of India conceded once that of the 10,612 deaths recorded immediately after vaccination, most occurred after OPV and Pentavalent shots

- The WHO database showed 1000 cases of AFP annually in India when the oral polio vaccine was launched. In 2012 when India was declared polio free, there were 60,992 cases annually. Currently there are more than 50,000 cases of AFP anually

- So for a disease attributed to toxins, faulty medical procedures, lack of sanitation, hygiene and nutrition we introduced a paralyzing product which has caused the Indian exchequer 14,000 crores up to 2012 and which has increased the rate of paralysis 60 times

This was another stupendous lie.

When mass interventions are taken up there should be abundant caution to ensure that no one is harmed. But mass vaccination campaigns are taken up with the full knowledge that 100% of the population will be needlessly harmed. The resultant diseases and disabilities that are the output become the input for the pharmaceutical industry. They can then push drugs and devices and also other vaccines for the diseases created by the previous vaccines.