Why Monks are fearless 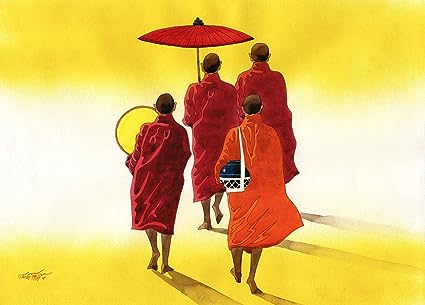 (Image courtesy: Sulis Fine Art, Naing Mg)
Why Monks are fearless.
I have associated with monks of the Ramakrishna Order for a very long time. I first entered the premises of the Ramakrishna Math at Bhubaneswar when I was five years old. The peace and tranquillity within the Math gripped me immediately. I remember walking through the tree lined aisle and wondering whether I was in the world or out of it. I don't remember meeting any monk but the holy premises, the main hall at that time, and the big oil painting of Swami Brahmanandaji, the founder and first President of Belur Math, sitting in meditation gripped my attention. I understood that there are several things on earth that come from contemplation rather than unmindful action.
My father was transferred out of Bhubaneswar and for seven years I was in another heaven - an Air Force base. Here I had wonderful friends and witnessed selfless members of the armed forces. That was another kind of realization - that we needed total dedication to an ideal to make life meaningful. Our elders seemed least worried about the fact that life was temporary. They went about their work displaying exemplary courage. They also took time off to teach us children discipline and dedication. They used to tell us; "expect the best, prepare for the worst, and take what comes". Our Scout group was considered the best in the state and we were trained to be good citizens. We friends are now linked together thanks to WhatsApp groups and remain the little children we were, playing and studying in an enchanting atmosphere. But the memories of the Math were always with me.
After returning to Bhubaneswar I was busy with my studies and it was only after landing a job that I again started frequenting the Math - probably from the year 1982. The senior members of the Math immediately warmed up to me because I am from a district to which the Holy Mother belonged. They assigned me the work of manning the book store and I just loved it. It provided me the opportunity to devour almost all the publications. I was immersed in the wisdom that is India.
Every Sunday became a Math Sunday. Every holiday a Math holiday. I had the good fortune to meet and touch the feet of the spiritual giants. Swami Bhuteshanandaji, Swami Lokeswarandaji, Swami Gitanandaji, Swami Ranganathanandaji, Swami Gahanandaji, Swami Atmasthanandaji are among the monks whom I will remember forever. There was one quality that was visible in all. They were absolutely fearless.
Now what makes monks fearless? The most important factor is renunciation. They have cut off the threads of attachment. They no longer are a part of the world. At the time of initiation into Sannyasa they perform their own last rites cutting off the ultimate bond - the link to their bodies and minds. They then belong only to their Ishta. They surrender to the divine will. When the surrender becomes complete they know that there is nothing to fear. They go about their duties with great dedication and with hundred percent detachment. That is karma yoga. They pray every moment and cultivate love towards their Ishta. That is Bhakti Yoga. They meditate and contemplate on emptiness. That is Raja Yoga. They study the scriptures to realize that Brahman alone exists and the world is an illusion. That is Gyana Yoga. These practices and their life of discipline eliminate fear.
Always remember that attachment leads to bondage and from bondage comes fear. The fear of losing worldly possessions and relationships. The fear of losing the body and mind. The fear of losing the ego - ones individual and separate existence. Attachment is maya - the illusory force of the visible world that binds us to the dream we are witnessing. When we realize this and start waking up - through work, prayer, meditation and contemplation the world starts losing its grip on us and the fear starts reducing. You know that the divine alone exists and that you too are that.
Mahasambhuti Chakradhar had told us in one of his last discourses, "I alone exist. I am everything both good and bad. When darkness arrives and everything is doomed have nothing to fear. Remember that it is I who am standing before you. Love me then like you love me now."
I know that after I am destroyed I will find myself in his loving embrace. Fear, anxiety and panic have been a part of my life. I have learnt to look at these nasty elements with a detached eye. They are not a part of me. My suffering of four decades has made me realize I am not the body. The mind is what remains to be killed. Not easy. But with God's infinite grace that too will happen one day. Then there will be no I left. When the bubble bursts it will become the ocean.