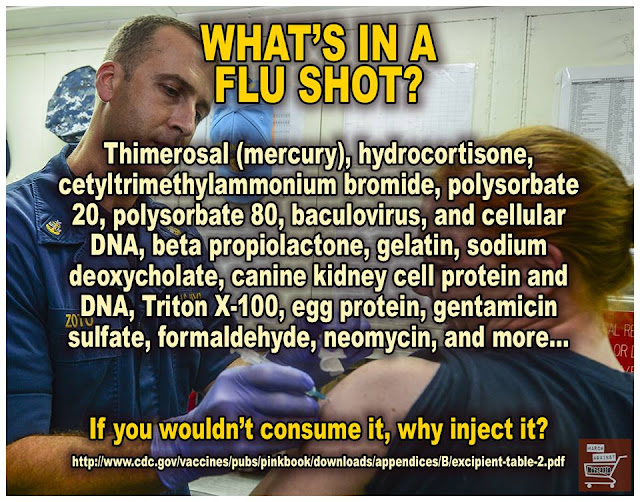 What are they injecting you with? Do you have any idea?
Vaccine ingredients;
While the official narrative is that few antigen are injected to create antibodies, the truth is there are hundreds of other ingredients in vaccines that public are blissfully unaware of. They can be categorized as;
- Adjuvants ( aluminum nanoparticles, squalene)
- Disinfectants (mercury, bleach)
- Antibiotics
- Agents to invade the blood brain barrier
- Agents to invade the placenta barrier
- Human and bovine aborted fetal cells
- Dog and chick cells
- Insect cells
- To host the above we have human, avian, and animal serum
- Excipients
- Foaming agents and detergents
- Endocrine disruptors
- Known sperm killers
- Other reproductive toxins
- Many others that do not fall in the above category
https://worldmercuryproject.org/…/toxic-vaccine-ingredient…/
Detailed discussion here; Be prepared to be shocked. CDC provided list is discussed.
http://vaxtruth.org/2011/08/vaccine-ingredients/
It is a mystery how the body seeks out the antigen from these plethora of ingredients and makes antibodies to it! Also what happens to the antibodies the body prepares reacting to the other biological matter? What does this process do?
Vaccine Contaminants;
Contaminants are what we find besides the declared ingredients that are official. Without the ingredients you cannot have vaccines. Contamination is extra. Finding contamination in vaccines is an ongoing process. More and more are found on investigation and routinely denied. Contaminants occur as animal, human and avian serum and cells are used in vaccines and it is not possible to sterilize them, various substances that are used during vaccine manufacturing process remain in the final product, the use of plastic and latex in packing and processing seeps in, use of glass vials result in glass sheds, use of steel utensils result in steel shreds, and a wide range of other metals (including uranium) whose origin remain a mystery. There are also ingredients that are not declared but serve a purpose, for example hcg hormone in tetanus vaccine used to sterilize women in Africa and Asia.
Vaccination is clearly not about protecting from any disease. That is an excuse. It serves an agenda. That agenda is about manipulating and destroying humanity.
Vaccines are about "protecting from around 15 diseases". Nobody is bothered about the 292 serious diseases so far officially connected to vaccines through 1339 published studies in the NIH database. Vaccine package inserts themselves talk of 217 diseases. The IoM has confirmed 150 of them are valid concerns while reserving its judgement on the rest. This is despite the fact that vaccines are protected turf. Officially you cannot go against vaccines and survive.
No system within the medical industry is as corrupt and riddled with conflict of interest as vaccines, virology and immunology.
A compilation of prominent vaccine contaminants;
https://currenthealthscenario.blogspot.com/2018/10/vaccine-contamination-is-huge-global.html?fbclid=IwAR0FVRq7iprdEeXAUwd-yRGcoSfa2_bRxjpqnJgBBtjNBfkNaGp8U9POo8w