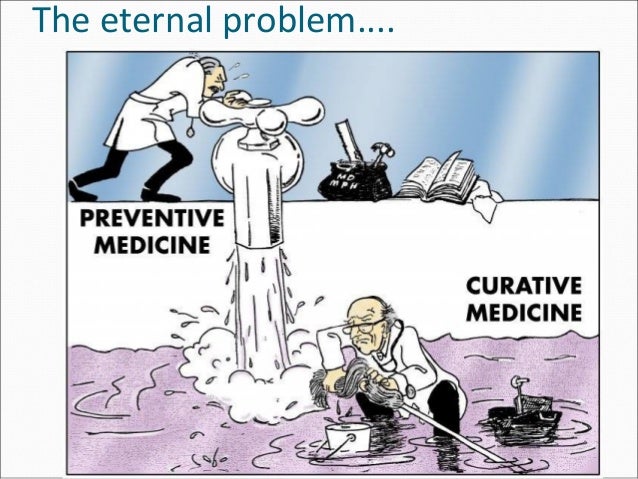 Public health is an excellent term to convince the public that both governments and the medical profession are doing something to improve the health of the general public. But what is it really?
I am reminded of a gynaecologist in the USA who was shocked at the seriousness of the cases that were increasingly coming to her department. So she decided to study public and preventive health to contribute her bit to health. After obtaining her degree she started working in the field. Within a very short period she made an outstanding discovery. It was the activities under the nomenclature of public and preventive health that was really behind the abysmal state of health of populations!
Shocked she depicted the dilemma in a cartoon provided above; the public health doctors opening the tap of disease while the doctors of other modalities were busy cleaning the muck. Now she is a nutritionist.
This is well demonstrated in the recent ruckus over dangerous chemical potassium ferro cyanide found in free flow vacuum evaporated fortified table salt of a particular company. Now it seems all companies producing such salt have it in their product. Thus such "fortified" salt is making us sick instead of ensuring health.
Iodized salt is in itself a scandal. Sea salt has natural iodine. It also has 78 other vitamins and minerals that our body requires. Thus salt was a very highly regarded subjected in earlier societies. Animals too frequent salt lick spots to get their dose of salt. Shopkeepers knew that salt was essential and many had moral objections about selling it. They had sacks of sea salt and customers could take their requirement for free if they made other purchases. The customers never failed to pay for the salt they obtained as salt had to be paid for.
However with the entry of corporate giants things changed. It was quickly realized by one corporate entity that salt being regularly consumed, it could be a brilliant idea to enter into the business.
A lobby started working and highlighted that a few members of a remote hill community suffered goitre due to iodine deficiency. Quickly this was advertised to be a national problem. The corporate entity then suggested to the government that iodine fortified salt was the solution. The government accepted the proposal as the commercial sale of salt could be taxed and revenue earned. Thus the vitamin and mineral rich sea salt was replaced with "clean and free flow" salt cleaned by aluminium, a well known neurotoxin and genotoxin.
Artificial iodine was added which combined with the aluminium to become aluminium iodide which is a classified hazardous toxin. Life giving sea salt became disease inducing free flow salt. The "impurities" removed from salt became the inputs for the giant vitamin industry. What was earlier free became costly supplements.
This is "public and preventive health" for you. DDT and a host of other toxins are regularly sprayed to kill mosquitoes. They don't kill mosquitoes but those insects that feed on mosquitoes and thus mosquitoes grow at a faster rate. The DDT and chemicals spread create neurological disorders, paralysis and cancers.
The worm removing medications given to children destroy their gut microbiome and cause a host of ailments. Now salt will be fortified with another toxin to "prevent" another disease. Food fortified with GMOs will "tackle malnutrition". Vaccines given to " prevent" disease create 397 serious diseases and disabilities including cancers. Without these diseases the medical industry would collapse.
Some other interventions are fluoridation of tooth paste and mouth washes that continue despite evidence fluoride has nothing to do with oral health. The use of chemical mosquito repellents, room fresheners, and chemical hand washes has very severe consequences.
Thus we must petition the government to prevent these "preventive measures" so that we and our children can take natural food, live in a natural environment and enjoy health.


This comment in a medical group must warn us all.


"It is proposed there should be continuous investigations into adverse drug reactions, adverse drug interactions, drug sensitivity and allergies, and patient sensitivities. It is felt efforts now are not adequate and awareness among practitioners is low. With medical journals becoming subscription oriented and studies invariably suffering from conflict of interest, both patients and practitioners are at the mercy of the system. If a patient displays drug induced symptoms or allergies they are treated with other drugs and the above mentioned factors are overlooked. The burdened practitioner is also hindered by lacking access to protocols to treat such iatrogenic conditions. What is more confusing is that such events are not just related to drugs but also diagnostic devices that involve radiation or medications. There are today an avalanche of such conditions that beg attention. There is an urgent need to take note of this ever present danger."
In short drugs are causing problems and those problems are addressed by prescriptions of more drugs.