Don't be worried about Tetanus. 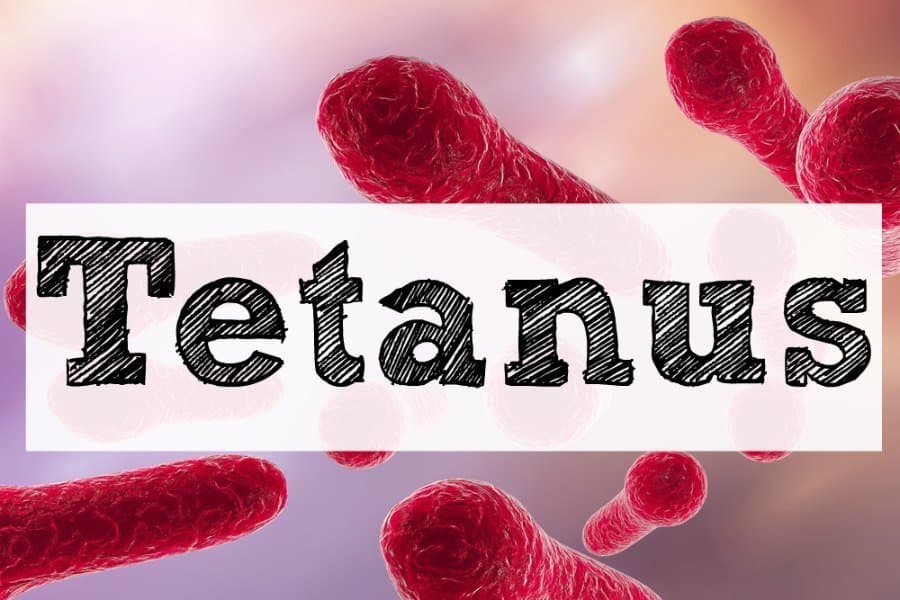 Facts about Tetanus.
- Spores exist mostly in cattle and horse manure.
- The tetanus bacteria cannot survive in oxygen. It is anaerobic.
- If wounds bleed, are cleaned properly and are left open, no tetanus. Wound hygiene itself has drastically reduced cases of tetanus.
- The above knowledge led to drastic fall in cases as adequate measures could be taken.
- After a wound vaccine is useless as the spores act much earlier than the vaccine can.
- Vaccine efficacy has never been tested in any clinical trial.
- Tetanus is not contagious.
- Tetanus toxoid is the best carrier for infertility agents.
- The vaccine contains both mercury and aluminium and is associated with a long list of serious adverse effects.
- There is no natural immunity from tetanus. This puts artificial immunity under a cloud.
- Majority of tetanus cases occur among vaccinated.
- Doubts have been expressed whether animal origin toxoids can work for humans.
- Homeopathic remedies Ledum and Hypericum are excellent as both remedy and prophylaxis. No side effects.
Don't give in to the fear. Tetanus is highly uncommon. People living in farms would have been decimated if tetanus occurred at the drop of a hat. Your fear feeds the pharmaceutical industry. Remember, health is important and is the best preventive.

A detailed article on tetanus having some very valid points to say can be found here;


The homeopathic approach is here;

What do science and the manufacturers say?

- Nervous system side effects have included neurological complications including cochlear lesion, brachial plexus neuropathies, paralysis of the radial nerve, paralysis of the recurrent nerve, accommodation paresis, Guillain-Barre syndrome, and EEG disturbances with encephalopathy.
- Tetanus toxoid has been assigned to pregnancy category C by the FDA. Animal studies have not been reported. There are no controlled data in human pregnancy. Tetanus toxoid is only recommended for use during pregnancy when benefit outweighs risk.Tetanus toxoid Breastfeeding Warnings. There are no data on the excretion of tetanus toxoid into human milk.
https://www.drugs.com/sfx/tetanus-toxoid-side-effects.html

- No studies have been performed with Tetanus Toxoid Adsorbed manufactured by Aventis Pasteur Inc. to evaluate carcinogenicity, mutagenic potential, or impact on fertility.

- Should not be given to children less than 7 years of age and elderly above 65 years.
https://vaccines.procon.org/sourcefiles/sanofi_td_absorbed.pdf

Per the CDC, the death rate from tetanus in the U.S. in 1900 was about 2.5 per 100,000 population. By the time a vaccine for tetanus become widespread in 1950, the death rate had already dropped 90% to about 0.25 per 100,000, due to many factors. Again this was pre-vaccine. Only about 15% of all tetanus cases occur in children under age 20. Almost all fatalities occur in people over age 45. Thus the incidence of tetanus in children is very low, and death is barely a factor in that age group. The tetanus vaccine is not a standalone, but is normally given in combination with antigens for diphtheria and pertussis (DTaP vaccine). Because all vaccines have risks of adverse health effects, it is reasonable that parents weigh these risks against the risks of contracting the disease in the event their child is not vaccinated. Also since vaccine failure is common, being vaccinated is no guarantee of protection. For example, pertussis outbreaks in populations with high or full vaccination rates are common. (search: "vaccine failure” pertussis)
The following is copied from the National Vaccine Information Center (NVIC) website (link below):

“As of August 8, 2018, there had been 5,369 claims filed in the federal Vaccine Injury Compensation Program (VICP) for injuries and deaths following pertussis-containing vaccination, including 862 deaths and 4507 serious injuries. The DTaP vaccine is the vaccine with the most injury claims filed, including for death, and it is the second most compensated vaccine injury claim, with influenza vaccine now in first place.”

So we can see that severe injuries and death from the DTaP vaccine are very real risks.

“How can the Tetanus vaccine induce immunity, when contracting the disease naturally does not give immunity?”–NVIC
“A tetanus vaccination cannot possibly protect from the disease since the human organism cannot build up any immunity after contracting the disease (as is the same after HIB, diphtheria or TB). So, if nature hasn’t planned the immunity, how does the vaccine work? Furthermore, the tetanus vaccination (as is the case with the diphtheria vaccine) is a so-called toxoid vaccine. The killed poison of the tetanus bacilli is injected into the body and meant to protect us. But the human body cannot build up immunity against poisons31. How can the vaccine protect us then? The official statistics of the various countries show us that the vaccine does not protect us. The Robert Koch Institute in Germany admits that 2/3 people who contract tetanus have been fully vaccinated (32). The rate in Switzerland was 50% fully vaccinated and still contracted the disease.”—Anita Petek-Dimmer
Did you know there is NO diagnostic test for tetanus? So how do we know a person actually has tetanus. Symptoms of tetanus are similar to symptoms of some other toxic poisonings. We have no test to prove the person has tetanus. And good wound care is far and away your best treatment for dirty injuries. And the risk for tetanus is not the same in every area of the country. And tetanus vaccine is one vaccine that I get many many emails on from people telling me of damage to themselves or their children that doesn’t go away – tetanus like symptoms. The vaccine is so extremely toxic its been diluted and diluted………and still causing problems in some. And does it even work? Questionable.–Sheri Nakken RN


So why is this being injected into people?

Many of you might have seen an article circulating (and being heavily covered by mainstream media) regarding a 6-year-old boy in Oregon who contracted tetanus and nearly died. Please consider the following:

1. This is not a recent case. This was part of a CDC case study report that, in my opinion, was strategically published recently, discussing a 2017 case of tetanus. The questions you should be asking are “why wasn’t this BIG news in 2017?” and “what purpose does this serve to report it now?” I wonder if this could have anything to do with a couple of recent senate hearings on the “health crisis” and “misinformation” and the wildfire-like spread of proposed vaccine mandates across the country? Seems like a great way to manipulate people into voting away their rights...

2. Although I do agree that when contracted, tetanus can be very serious, it’s important to understand that the risk of actually contracting tetanus is EXTREMELY low. We’re talking about .0000009%. This case was the first case in 30 years so that should tell you something. I also find it funny that they’ve removed that little tidbit from the headlines. It’s also important to understand that tetanus, although very serious, is also treatable.

3. So if tetanus is extremely rare, what about adverse events from the DTaP/TDaP/DTP vaccine? Looking at VAERS data (Vaccine Adverse Events Reporting System) we show 13 DEATHS from the vaccine in 2018 ALONE. That number climbs to 41 if we add in DTaP combined with other vaccines. According to a study performed by Harvard Medical school on the current VAERS system, “Adverse events from drugs and vaccines are common, but underreported. […] Likewise, fewer than 1% of vaccine adverse events are reported.” So it’s likely that the 13 reported vaccine deaths in 2018 are actually closer to 1,300. Wonder how high that number would be if we looked at 30 years worth of data? Keep in mind this does not include other adverse events. If you look at those that resulted in disability we see 103 in 2018 (which is likely closer to 10,300).

So here we have a 2 year old tetanus case being spread around mainstream media in the midst of discussions and hearings regarding vaccine mandates and censorship of “misinformation” from the opposition. This case wasn’t flooding the media when it occurred AND it’s clear that the risk of death from the vaccine is FAR GREATER than the risk of even contracting tetanus. Coincidence? Doubtful.


Abstract The effect of daily intravenous administration of 1000 mg ascorbic acid (AA) in tetanus patients aged 1-30 years was studied. In the age group of 1-12 years, 31 patients were treated with AA as additional to antitetanus serum, sedatives and antibiotics. It was found that none of the patients died who received AA along with the conventional antitetanus therapy. On the other hand, 74.2 per cent of the tetanus patients who received the conventional antitetanus therapy without AA (control group) were succumbed to the infection. In the other age group of 13-30 years, there were 27 and 38 patients in the treatment and control groups respectively. The mortality in the AA and control groups were 37 percent and 67.8 percent respectively. These results suggest that AA might play an important role in reducing the mortality of tetanus. This was supported by the fact that AA was found to mitigate the toxic effects of strychnine producing tetanus like condition in young chicks in the present study.


** On why we are offered tetanus jabs in A&E: Source: Green Book p. 379 - "... tetanus vaccine is not considered adequate for treating a tetanus-prone wound. However, this provides an opportunity to ensure that the individual is protected against future exposure (see Table 30.1)." https://www.gov.uk/government/uploads/system/uploads/attachment_data/file/148506/Green-Book-Chapter-30-dh_103982.pdf