Spirituality & Religion: Are They Different? 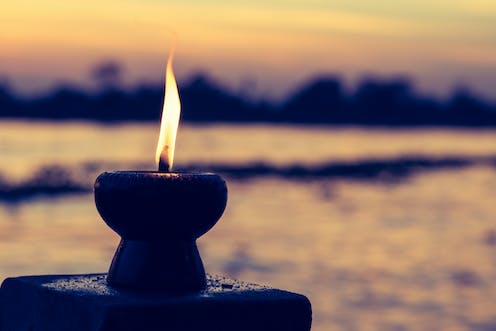 Perhaps there can never be a - "this is it" in spirituality. There is no one path. We all are different shaped by numerous previous lives and experiences. It is only after trauma and adverse experiences that a few wake up. Even in them the urge to participate in the world is very strong. They too have to deal with baggage and also the thoughts that they have unfinished work. This propels people forward and makes them forget.

India advocates weaning away by restraining from spiritually injuring acts at first. Through constant contemplation on the higher truths (Vedantic mahavakyas) the mind is strengthened. Then alone one can remain as a witness. When that happens the wheel loses its momentum. But it still rolls forward without power for some time. The knowledgeable witness their remaining experiences and are ultimately released. The individual then dies to be merged into the one consciousness that pervades everything.

Where do I put religion? Suppose a spiritually realized person wanted others to follow the path. Suppose he was aware of past and present, the visible and the invisible, the material and spiritual worlds. He had the long term vision that saw the ups and downs of life. He knew that humanity served a higher purpose and that souls were having an experience in order to evolve into the higher order.

Suppose he wanted to lessen the bother and tried to make the path easier. Suppose he knew that there is no one size fit all. Then he would draw up a plan whereby all could follow a common path of least harm on their journey towards the goal. He would educate the people in a manner that could fit into the broad vision of things knowing fully well that this too would pass and that many would have to learn through falls and stumbles. Maybe this is how religion took shape? A mass form of spiritual practice that somehow kept even those not devoted to overt spirituality in its thoughts.

India had a peculiar religious structure. There was no Pope, no Papacy, no absolute rules and regulations. Yet the people followed a single path despite group and individual differences. This was noticed by the British who wondered how that was possible. But what was, was right in front of their eyes.

It was as if people intrinsically knew what was right and what was wrong. How? If we delve into the oriental scriptures we find that geographical India is the ultimate hot spot for evolved souls. Even animals, birds, insects, and trees are enlightened beings. The current fall was prophesied and repeatedly pointed out to people so they would hasten towards the ultimate goal - forgetting the world and merging with the supreme. Religion therefore was a loose structure that was eye opening keeping in view the overall scheme of things. There were mass practices, there were splinter groups, there were individual seekers, there also were the Charvaka’s – those who believed in the material alone and disregarded the spiritual destiny of man.

Organized religion too has spirituality in the background. Look at Christianity. It has at its base the 10 Commandments that the Church ignores and does not follow. The "10 Commandments" is the essence of Vedanta intended for the West. The assertion I AM THAT I AM is the highest realization. The Church was never in tune with this and probably does not worship Jesus. Maybe it follows someone else. Thus we have to blame institutions and not religion per se.

Religion is, and always will be, mass spirituality. Institutions can serve a purpose if their leaders are awake to this truth. Religion exists without institutions as a thought pattern that is refined by those who travel the path. The seeker dips in here and there to pick up what suits him or her. This is exemplified by how religion survives and has survived in India.

Mankind is always progressing both individually and collectively. Sri Aurobindo has talked of the coming SuperMind. The Mother has said how the current population boom is actually lifting the thought process higher and higher. We have progressed from a stage of obedience to an intellectual age. This shift of age is facilitated by Avataars. Lord Siva had organized the thought process of human beings and channeled it towards a constructive phase. This base was expanded by Lord Rama into an age where moral values were super most. Lord Krishna provided the ecstatic love stage - the Divine stage.

Sri Ramakrishna used to say, "There is no end to spirituality. There is just more and more." Swami Bhuteshanandaji had made a classic statement, "Spirituality begins when you realize God!" He was a man of God, a realized soul, he should know.

What lies beyond? Those of us who came in touch with MahaSambhuti Chakradhar have heard of huge changes that lie beyond. Religion will transform to spirituality in the most complete manner. Religion mostly deals with the "Sthula" - the material. It points towards the Adhyatmik - the spiritual, urging populations to transcend the body and mind. The Guru's were supposed to lead the Atman to the ParamAtman. But the Guru's captured the people and kept them in their own abode. MahaSambhuti had predicted their fall and what a fall that has been! Everything will crumble - all of today's religious leaders will feel the heat and will be rejected by the people.

MahaSambhuti will then fill that space with his direct touch. How that will come about is not yet my domain because I am still learning. But what I know is that in the coming age there will be no intermediaries. There will be teachers, yes. But most probably there will be no Guru's because there will be no need for them. A mental bridge will be available directly from the Atman to the ParamAtman. The system of education will change to bring about that transformation.

Souls are suffering today in this material age. The extreme mental dissatisfaction we witness everywhere today reflects that soul suffering. They are crying and thirsting for spiritual knowledge. Their thirst will be fulfilled by MahaSambhuti. I am ill equipped to say more. All I can say is that there will be a huge shift in thinking and the way society conducts itself. An entirely new Age will be established and the knowledge will again go out to the world from India.