Anti-fertility Vaccines Being Tested Since 1976.

Vaccine to Block Pregnancy Is Tested 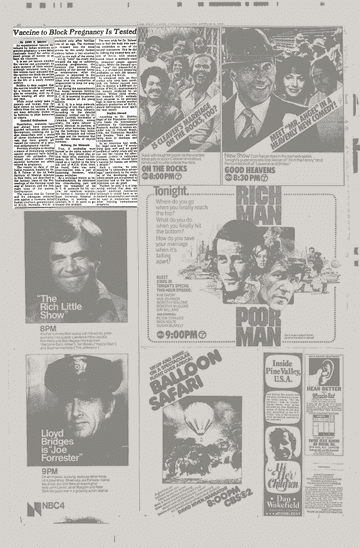 An experimental vaccine developed by Indian scientists to prevent pregnancy is now being cautiously tested for safety in small groups of women in at least six countries.

Previous attempts to develop a means of immunizing women against pregnancy have failed because the antibodies that formed also attacked certain essential hormones not solely related to pregnancy.
The results to date of the Indian research, headed by Dr. G. P. Talwar at the All India Institute of Medical Sciences in New Delhi, are described in the January issue of the Proceedings of the National Academy of Sciences and the February issue of the journal, Contraception.
The vaccine that Dr. Talwar and his colleagues prepared acts against a hormone called human chorionic gonadotropin, or H.C.G. Normally, H.C.G. is produced only after fertilization of an egg. The hormone is released into the blood stream by the newly formed embryo before it has attached itself to the wall of the uterus.
H.C.G. “tells” the ovary that released the egg to continue producing progesterone, the hormone that prevents the shedding of the uterine lining, or menstruation. After the embryo is implanted in the uterus, the placenta forms and takes over the production of progesterone to keep the pregnancy going.
But during the approximately five weeks between fertilization and placental development, H. C. G. is essential to preventing the demise of the young embryo.
H. C. G. is a large molecule, consisting of two main parts—the alpha and beta subunits. According to the detailed chemistry worked out by Dr. Robert Canfield, biochemist at Columbia University, among others, the alpha subunit is nearly identical to portions of several other hormones, including the hormones that stimulate the formation and release of eggs and the hormone that causes the release of thyroid hormone.
Thus, if antibodies were formed to the alpha subunit of H. C. G., they would also attack these other essential hormones. So Dr. Talwar concentrated on a vaccine to the beta sub unit of H.C.G. Even there, he found, there was some cross‐reaction with a part of luteinizing hormone, which causes ovulation.
By a technique known as immunoabsorption, he eliminated this cross‐reacting part and used the remainder of the H. C. G. molecule for his vacIcine. An American scientist, Dr. Vernon C. Stevens of Ohio State University Hospital in Columbus, is working with synthetic H. C. G. parts to get around this problem.
Refining the Molecule
The next trick for Dr. Talwar was to fool the body into making antibodies to one of its natural substances. This he did by linking the treated beta subunit of H.C.G. with tetanus toxoid, which is normally used to immunize people against tetanus. When the immune system “sees” the tetanus‐H.C.G. mix, it is tricked into producing antibodies to both the tetanus protein and the H.C.G.
In simulated tests on four women who have been sterilized, the Talwar vaccine was able to destroy a 5,000‐unit injection of H.C.G., approximately the amount produced by an embryo. Within three weeks, the women's H.C.G. antibody level returned to its previous high, in time to counter another embryo's production of H.C.G., should fertilization occur again the next month.
According to Dr. Sheldon Segal of the Population Council who heads the International Committee for Contraceptive Research, studies in women are under way in Finland, Brazil, Chile, the Dominican Republic and Sweden. Tests are also being done in monkeys and chimpanzees.
In an interview last week, Dr. Segal said that “if everything goes well and no great problem of safety arises and we can test the vaccine for effectiveness quickly in subhuman primates, then we should have a vaccine for human use within a decade.”
Such a vaccine, he said, would be “a tremendous advantage,” particularly to the women of the developing world, where people are accustomed to injections and to the fact that injections can do good.
Further, he said, it is a longacting method that does not require continued motivation (although it would have to be renewed occasionally) and could be used in conjunction with other existing immunization programs.
https://www.outlookindia.com/magazine/story/immaculate-injection/235897
29 OCTOBER 2007SOCIETYMEDICINE FAMILY PLANNING