By Mark Blaxill
The National Health Center for Health Statistics (NCHS) released its latest prevalence rate for autism spectrum disorders (ASDs) in American children this Wednesday. Their “data brief”, which is based on information gathered in the National Health Information Survey (NHIS), reported an ASD rate for 2016 of 2.76%, or 1 in 36 American children (1).
This is the highest rate ever recorded in a national survey of children in the United States and was an increase from the rate of 1 in 45 children (or 2.24%) reported in the 2014 NHIS survey (2). The ASD information reported in these surveys includes children between the ages of 3 and 17 years of age and any diagnosis of an autism spectrum disorder, including Asperger’s syndrome.
This startling new peak received virtually no media coverage and was downplayed by the NCHS, whose headline finding was that--despite setting a new American record with a 1 in 36 ASD rate: “There was not a statistically significant change in the prevalence of children ever diagnosed with autism spectrum disorder from 2014 to 2016.” (1)
Yet this new 2016 rate is a sharp increase from the 2007 report, the first year in which the NHIS included the question, “Has a doctor or health professional ever told you that [sample child] had Autism, Asperger’s disorder, pervasive developmental disorder, or autism spectrum disorder?” The 2007 report, also measuring the rate for 3-17 year-old children, reported an autism rate of 1.1%, or 1 in 91 American children (3). 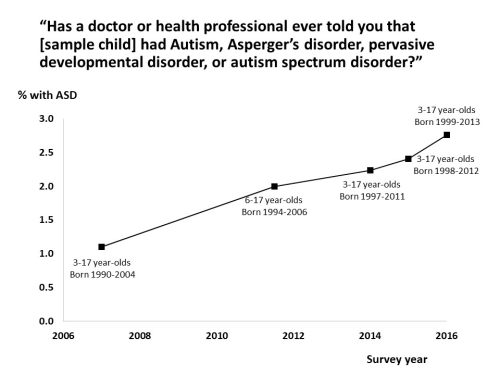 The NCHS, like the CDC a department within the Department of Health and Human Services, follows a different methodology in the NHIS than the approach used by the CDC’s Autism and Developmental Disabilities Network (ADDM), which last reported an autism rate of 1 in 68 American children for 8-year-olds born in 2004 (4). The ADDM network’s estimates likely include fewer children with Asperger’s (only about 10% of the ADDM cases have an Asperger’s diagnosis), which may explain why NHIS ASD rates have been generally higher than ADDM rates.
The ADDM Network has reported autism rates every two years with reports of 8-year-olds from 2000 to 2012 (4). The NHIS reports have been published only intermittently, with four different publications since 2007 (1-3, 5). Unlike the ADDM report, the NCHS publications have followed subtly different methodologies.
But an increase of 147% in less than a decade is certainly an urgent cause for concern: indeed, the new report also described another record rates for ASD of 1 in 28 (!) for boys born between 2014 and 2016. Because the NHIS survey includes many children younger than 8 years of age, their ASD prevalence rates are likely understated, since many younger children don’t receive an autism diagnosis before they are 8 years old. The new report reflects this bias, since it shows an ASD rate of 1 in 45 children in the 3-7-year-old group, likely an underestimate of the true rate for that cohort.
On a personal note, it’s now almost exactly ten years since Dan Olmsted, Kim Rossi, JB Handley and I launched AgeofAutism.com in November, 2007. Soon after, when the NHIS survey came out reporting a 2007 autism rate that first breached the 1% barrier, my autistic child was barely a teenager and I remember thinking, “surely, we will begin to treat autism like a national emergency now that 1 in 91 children are affected.” A little less than a year ago, Dan passed away suddenly only a week after he and I finished writing Denial: How Refusing to Face the Facts about Our Autism Epidemic Hurts Children, Families, and Our Future, a title that reflected our shared sense of outrage over the denialism reflected so clearly in this new NCHS publication and its reception. My daughter turned 22 this week, formally passing the threshold of adulthood in the autism services system. And on the exact, same day she entered her adultprogram, we learned that ASD rates in American are approaching 3% of children and 4% of boys.
It was as if nothing has happened. The world has truly gone crazy.
References.