How Big Pharma Invests in Politicians

THE BUSINESS OF BEING A NATURAL MOM IN THE MODERN WORLD

Does Big Pharma Own America?


Mitchell voted on SB 277 last week, which would make her in violation since SB 277 would bring financial gain to Merck who gave her money within 12 months of the vote.

Mitchell has been receiving direct funding from Merck as far back as 2010, as have other members of the State Senate Health Committee (see chart below) including  Sen. Andy Vidak. Vidak also received direct funds from Merck as recently as 2014.  Vidak was set to vote on the bill Wednesday as a member of the Education Committee, but becauseit was tabled he will vote privately next week. Voting on this bill could also put him inside the restricted 12-month period (click here to see the campaign donations).

Education Committee Chairman Carol Liu expressed a desire for religious exemption to be an option in California, after witnessing droves of parents of vaccine injured children show up at Wednesday’s hearing (click on the above link and start at 48:30 to hear). There were also educators, health professionals and constituents that came forward to let their voices be heard in opposition to the proposed legislation.  Liu gave Pan one week to re-tool and return for a private vote next week.
But the larger question remains: How did we get here in the first place?
In 1986 the U.S. Supreme Court ruled vaccines are “unavoidably unsafe.” The ruling allowed Big Pharma to be exempt from any responsibility of injury, and instead the Government set up a separate ‘court’ that pays Big Pharma’s bill for those who are either have a vaccine injured child or have a child who died as a result of vaccines.  To date, the government-sponsored Vaccine Injury Fund has paid out $3 billion in settlement costs to families.  Result? No Courts. You can’t sue a vaccine manufacturer if you are injured. 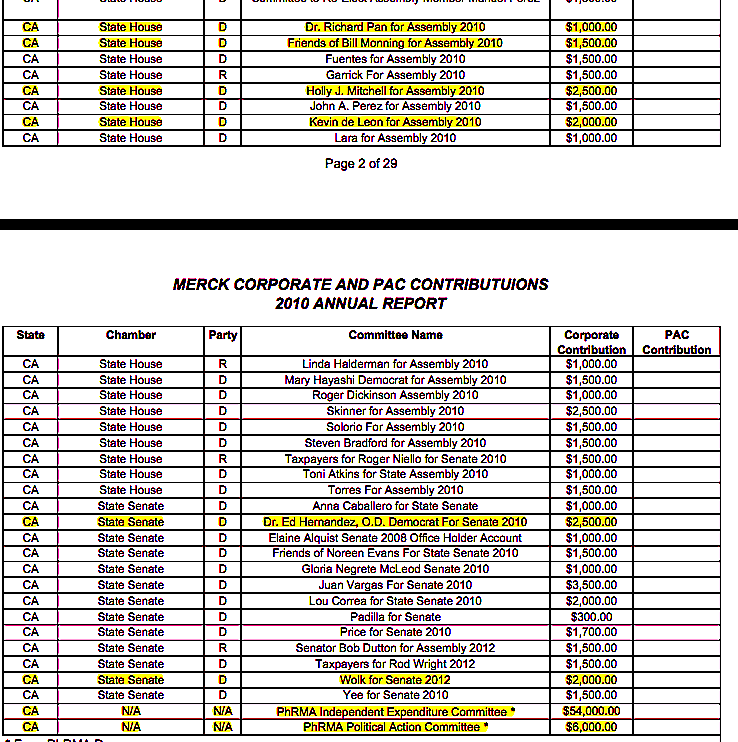 The next puzzle piece fell into place in the late ’90s. when the FCC deregulated its advertising policy allowing for pharmaceutical companies to market drugs direct-to-consumers (DTC marketing). That’s when the ‘ask your doctor’ commercials started showing up on television, which allows companies like Merck to market their drugs directly to children. Merck did exactly that with their controversial Gardasil vaccine, launching a fearcampaign on VH1 that targeted teenage girls directly to get  them to go to their parents and ask to get the shots. It worked.
It is also what has enabled Big Pharma to own the media, who in the age of the internet, are fighting for every advertising dollar they can get to stay alive. According to Robert Kennedy, Jr., Big Pharma is responsible for up to 70% of the advertising revenue on network television in non-election years and, as a result, major networks refuse to air the story. Result? No media.
So our courts are bought, our media is bought. What’s left?
Routine campaign practices: In 2014, Merck Pharmaceuticals spent $1 million plus on political donations made directly to candidates running for office across the United States. Those contributions follow a pattern of typically small, $1,000, $2,500, etc., mainly because they are direct and on the record.
But if you dig a little deeper, it turns out the indirect contributions are where things start to get more interesting. The real money is shuffled from hand-to-hand via third-party groups called political action committees (PACs).
For example, Merck gives $15k to the PAC Biotech Industrial Organization; the Biotech Industrial Organization turns around and gives $10k to the Democratic Governor’s Association.  The Democratic Party is the largest contributor to Sen. Pan’s campaigns (followthemoney.org). PACs like, PhRMA (Amgen, Merck, Pfizer, Bristol-Myers Squibb, Eli Lilly, Novartis, Abbvie Inc.) regularly fund politician’s campaigns (see $54,000 & $6,000 contributions by PhRMA to California politicians in the chart above), but they do it in ways you and I might never suspect. Result? No politicians.
PhRMA hired 757 lobbyists in 15 years.
Merck gives ten times that and more in national grants at medical schools and universities, thereby sprinkling the money like a bread-crumb trail to up-and-coming doctors and researchers making sure they are bought before they even get out of medical school.
It gets worse.
Merck is the exclusive maker and manufacturer of 10 vaccines currently on the CDC schedule, the most controversial being Gardasil and the MMR.  (Gardasil is facing formal criminal complaints from Spain filed in August of last year. The story has yet to make headlines amongst major media outlets in the United States at the time of this post.)