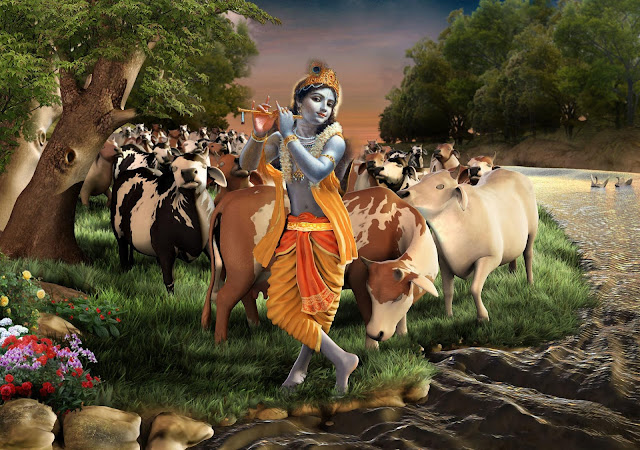 For those who have had pets you all know how communicative animals can be. Animals are today widely used in healing, from dolphins to reassure expecting mothers to trained cats and dogs helping the disabled and traumatized. Recently I saw in the Discovery channel a giant whale being freed from the nets of a fishing trawler. The five men worked in great awe and fear as the huge being remained motionless, the eyes watching every move. After the whale was free it swam around and playfully nudged all the five in its own way of saying thanks. What a great event, like finding an alien in outer space !!

My parents tell me of a toddler pursuing a cobra with a stick. The snake protested by occasionally standing tall but did not chase, hiss or bite. Similarly I have seen a small child find itself right in front of a huge galloping cow. Even as the mother screamed in terror, the cow stopped and playfully toyed with the child by placing it in between its huge horns before sauntering away. My uncle had a pet poodle which seemed to understand every word of what we said. When we commented it was listening it would sheepishly slink away.

In India animals have religious significance. Near a temple devoted to Lord Shiva you would find bulls and snakes, the official animals of the Lord. Near places where Lord Rama or Hanuman is worshipped you would find monkeys in plenty. There is a temple devoted to rats in northern India. People offer food to the millions of teeming rats and eat the leftovers. Despite the rat population the area has never seen a plague. In southern India is a spot called Pakshiteertha, meaning religious place of the birds. Every evening two pigeons hone in on the temple, stay awhile and then fly away. This has been happening for centuries. Near temples of Goddesses where tantra is performed you would invariably notice dogs.

In Puri, the abode of Lord Jagannath, was a majestic bull which refused to accept any food that was not offered to the Lord. I myself, like all other devotees, use to touch the forehead of the bull as a mark of respect and it used to nod sagely in return. After the bull passed away, the locals cremated it as they would a devotee. In my own town lives a bull which attends religious discourses. At first the people used to shoo it away but later they realized the bull meant no harm and only wished to listen to the name of the Lord. Now discourses in the area do not begin until the bull appears.

Again in the temple of Lord Jagannath, a secret tantric ritual is performed where fish is offered to the Goddess Vimala. The fish is then disposed off outside the temple. A fierce black dog then appears out of nowhere to eat the fish preparation. No other dog dares to challenge it. This too has been happening for centuries. In the nearby town of Jajpur used to live a monkey which used to bathe in the temple tank every morning and sit in front of the deity. It was offered fruits by the devotees which it used to keep aside. It used to eat only after the deity was offered food. Needless to say, this monkey too received a decent cremation.

Snakes appearing during temple inauguration ceremonies and staying the whole period are not rare in this part of the world. Nearby a pigeon appeared during the inauguration of a Jagannath temple by an Iskcon devotee which stayed in the sanctum sanctorum the full night.

In Cuttack there is a Vaishnav ashram. The monk in charge used to treat a dog like an inmate. It was the last birth of a sinful person in a past life, he used to say. When the dog died, he arranged for the funeral and then invited the brahmins in the customary 12th day feast. The brahmins were furious and felt insulted. None came. But the feast went ahead regardless and hundreds of dogs attended. After the feast they just melted away. This incident is inscribed in all vaishnav temples as a miracle.

There is a place called Nemal in Salepur district of Odisha. It is the Samadhi spot of Swami Achyutananda - the great Prophet. A monkey used to travel all the way from Puri to attend its main festival every year. Journalists have followed and recorded its journey. The visits stopped a few years ago. Maybe the animal has passed away.

It is said that domesticated animals are rewarded with a human birth in its next life. It is also said that there are highly intelligent Godly animals who lead the animal world. We all know the various animal births of the Buddha.

In Ramakrishna circles the animals Swami Vivekananda loved and spent his last days with and the dog Kalia, a favourite of Swami Sivananda are legion. If you have visited the bael tree where Sri Ramakrishna practiced tantric rites under the watchful eyes of Bhairavi Brahmani, you cannot but notice the mongrels sitting around. Try fondling them, they will not shy away or snarl. You will notice devotees offering them biscuits.

In Joyrambati we have the rolly polly cats, favourites of the Holy Mother. They will sit up and yawn when you finish your food, and after the pranam mantra will calmly and majestically walk towards the plates to finish the leftovers. You should also see the dogs as they come running when the monks call for them by name, food in hand. I wonder what happened to the fish which pecked at the feet of Sri Ramakrishna during a flood and which he rescued and set free. And what about the horses which pulled his carriage when he decided to meet the devotees?

So the next time you meet an animal, treat it with respect.

Here is a good article here (thanks to Soaring Hawk);

How to communicate with animals.