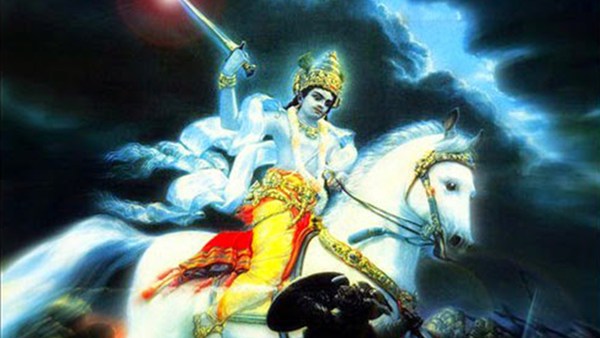 The whole world is waiting for the saviour to appear. The Muslims have the Mahdi. The Christians have the second coming of Christ. The Buddhas have the Maitreya. The Hindus have the Kalki; the tenth and last Avatar.

Will it be one single person or will there be multiple embodiments that will appear? MahaSambhuti Chakradhar had told me, "Everything that is predicted will happen."

Why is Kalki the last avatar? Will the world not need the Lord after that? How will devotees survive if that is the case? The possible explanation is we are at the end of one huge cycle of creation. The new age will be the beginning of another huge cycle. If everything has to be from scratch then the past needs to be wiped out. Maybe that is why the coming destruction will be unparalleled. Something like that has never happened before. Even Sri Aurobindo is supposed to have remarked, "I would not like to be a witness to it."

How will we bear this pain? How can we stop the experience from entirely consuming us? The only solution is to eagerly wait for Kalki. Amidst the doom and gloom that is the only ray of hope. The chance to see the Divine in flesh and blood. Thousands in India are bearing the pain of living in this wretched civilization because they spy an opportunity to meet Kalki.

I have seen MahaSambhuti Chakradhar. I have tolerated unbearable pain for that experience. Whenever I had wanted to commit suicide the scriptures have forbidden me. Today I know why.

But Chakradhar never claimed he was Kalki though the Prophecy of Swami Achyutananda described him as such. MahaSambhuti Chakradhar was the essence from which Avatars appear on earth. He had revealed to us that he lives in the cusp of nothingness and creation. "I live in the 9th Chakra. I alone reside there." He had come to prepare the ground for what is to come.

"Whenever I appear on earth cataclysmic changes happen. Without my physical appearance on earth such changes cannot be managed."

I have noticed the veil of illusion surrounding him. Even as he was in this world he remained hidden except to his devotees. He was a huge figure with startlingly handsome features. It was really difficult to stand before him and not realize who he was. But while travelling with him I have noticed people completely oblivious to his presence. He revealed himself only to those he willed.

Kalki too will have the same characteristics. He is already in this world. We cannot say how old he is now. But only a handful may know his true identity even though he routinely interacts with this world. For the rest he is just an ordinary person.

He has been born of humble parents. He may have completed both his marriages. He suffers from a curse that the world will know him only when one of his wives, Padmavati, will declare his presence. There are devotees who have earnestly requested her to do so even as they do not know who she is. The pain of separation from him troubles many a soul eager to meet him.

2022 is the year he is supposed to make his presence felt. Some say that it will happen in or after May 2022. Others feel 2023 will be the year. Whatever it may be devotees pray, sing bhajans, and chant mantras to hasten his appearance.

Just like Chakradhar he is not going to be a person donning the garb of any sect or decked in jewellery of any sort. He will be a person of this age, this yuga. He may be a disappointment for many. He will be the cynosure of the eye for the devotees. Just like Chakradhar who never performed any magic or solved anyone's problems. He lived like a slippery eel who simply refused to be entangled in this world. I have never seen a person so detached even as his intense love for all was obvious. Such are the qualities of Lord Shiva.

So who will Kalki be? What will be his work? He is very likely to emerge through a controversy. Not praise but blame may welcome him into this world. Maybe that controversy would be so huge very few would like to be associated with him. We live in an intensely negative world. Negativity will be the tool that will destroy it. Kalki may well make negativity his prime weapon. Nothing satisfies and evokes the interest of this world like controversies. What more do you need if you want to draw attention?

But all of this maybe a figment of imagination. The strength of power lies in secrecy and anonymity. The devil stays hidden. The saviour may too.

But the devotees will keep the lamp burning. While the destructive form of the Lord scares the world, those who are his own will be like the puppies licked by the mother.

Who will assist Kalki? Ashwathama was a great warrior who fought for Duryodhan. Circumstances arranged for him to kill the children of the Pandavas. Sri Krishna cursed him to a lifetime of pain and suffering. He is one of those who still live. The pain remains with him. Ashwathama resented the curse upon him. "I was destined to fight for the Kauravas. Why do you curse me for what was bound to happen?" He also wanted a chance to fight on behalf of the Lord.

That wish of his will be fulfilled. One of the first tasks of Kalki would be to search him out. The moment they meet the curse on Ashwathama would be lifted. Fully able he would then recover his weapons and be by the side of Kalki. There will be other warriors too. The formidable weapons hidden since the Mahabharata would be at their disposal.

Yes a huge war is ahead. It has already made its present felt. It will grow into the third world war; the mother of all wars ever fought on this planet.

The Lord himself will engineer that war.

For the devotees however Kalki is more important than what he is set to do.

Wait for Kalki with patience and fortitude. He will not disappoint you. Hold on to him as everything around you turns topsy turvy. He will erase your pain.

The kaliyuga is supposed to last 432,000 years as per the scriptures. The yuga started after the Mahabharata war. Therefore around 5370 years have passed. How are things going to end so fast? This is an issue that troubles many.

I have been informed about certain possibilities.

The Mahabharata war was an extremely vicious war. It is supposed to be held in the Kurukhsetra region which is now a desert. However if you take heed of the various descriptions in the Mahabharata epic ( the description of places and the size of the armies involved) you will realize that it was not limited to that region but spread out over a vast area involving what are today several countries. The description of the weapons used and their impacts point towards very widespread devastation. Society crumbled after that war.

It is said that the Mahabharata war destroyed this set up. Five subtle lokas were destroyed and only the earthly Nara Loka remained. As a result the inhabitants of the other lokas were forced to take birth on the earth plane.

This led to population explosion and also the birth of the population of the nether worlds in the Nara loka led to explosion of evil deeds. Evil overcame the world.

Swami Achyutananda offers the same explanation of the shortened Kali Yuga pointing to the explosion of evil deeds committed on the earth; the torture and killing of cows included.

Thus the quantum of crime and evil has shortened the timespan of the Kali Yuga from 432,000 to around 5000 years.

We know from Chakradhars advent that the time of this Yuga is up. The appearance and utterances of Saints like Sri Chaitanya, Sri Ramakrishna, Guru Govind Singh, Haidakhan Babaji, Guru Gorakhnath clearly show that the Kali Yuga is slated to end very soon.

Traditionally Indians know that crimes and atrocities burden the world who is symbolized as a cow. When this burden increases beyond tolerable limits, the cow travels to the abode of Lord Vishnu and appeals for help. The Lord then appears on earth and arranges events to ensure return to normalcy.